So now what? Myrthe Majoor offers her perspective on the assumptions surrounding the 'flying start'

Who's prepared for a pandemic? The graduating class of 2020 were thrown into a totally different field of work than the one they had prepared for. How do these alumni deal with the impact of the novel coronavirus on their creative-professional practice? Lars Meijer and Tim Bongaerts, who graduated in the year of COVID, will be exploring, ways to succeed as a creative entrepreneur in this new world, in collaboration with the ArtEZ Business Centre. By talking to resourceful ArtEZ alumni, they'll be trying to find out what it takes to be an entrepreneurial artist today. What lessons can we learn from these alumni?

This week, they spoke to illustrator Myrthe Majoor, about award nominations, the pressure to create work, and especially about the notion of the 'flying start'.
We're stumbling on some hurdles in our quest for ways to do business effectively during the pandemic. It's easier, of course, to write about the miserable side of the pandemic, and precisely for that reason we wanted to write about the opportunities that were still up for grabs. But that turned out to be easier said than done. It was almost impossible to find alumni who weren't incapacitated by the pandemic the past year. Had the virus really gotten in the way of every form of entrepreneurship? Or were there also alumni whose post-graduation path wasn't quite so bumpy? We decided to ask our questions to several heads of department at ArtEZ and got a couple of names of alumni who'd had a so-called 'flying start'. One of them was Myrthe Majoor, an Illustration Design graduate at ArtEZ Zwolle. Our interest had been piqued. How was her first year after graduating? 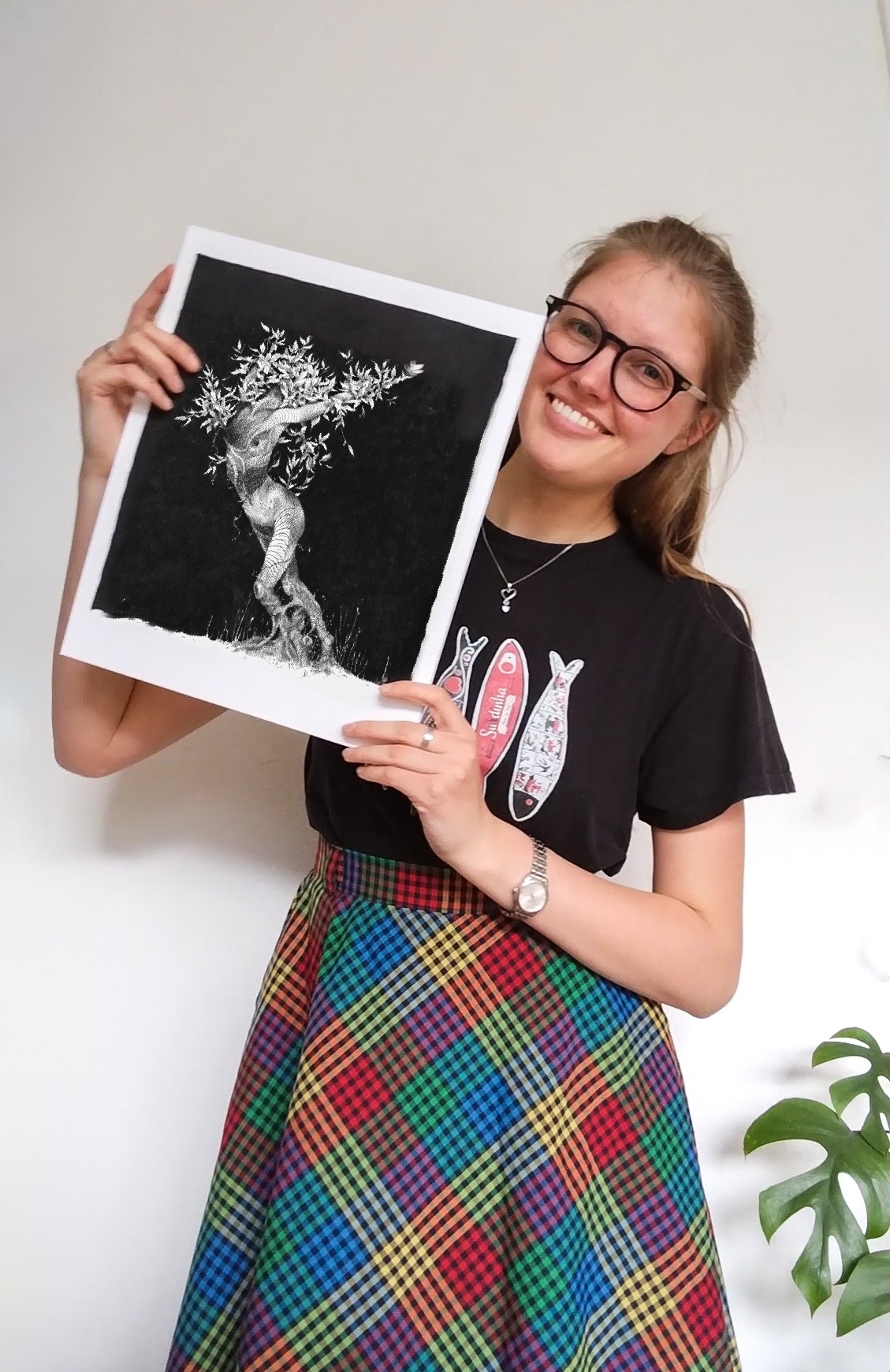 "My graduation work came together in an old pigsty," Myrthe laughed. "Because the academy was closed, this was the only way I could keep my work and private life separate." Like many other students, Myrthe was forced to approach her work in a different way. She decided to make a rigorous change: her graduation work would be an short animated film. It turned out to be a great move. The project, according to Myrthe, was the direct result of Myrthe's four years at the academy. The film is rooted in Myrthe's childhood fantasies: a daydream in ink about communing with wild horses, based on the 1953 black-and-white film Crin Blanc. For the film, she used monotypes: a printing technique that involves drawing on a smooth surface with ink or paint, then pressing the wet ink onto paper. "We had all summer to graduate, and I definitely needed that time," Myrthe said. Her film Dans les nuages blancs
was nominated for two awards at the Dutch Film Festival: the Van Vlissingen Fund Award and the Kepler Animation Prize. 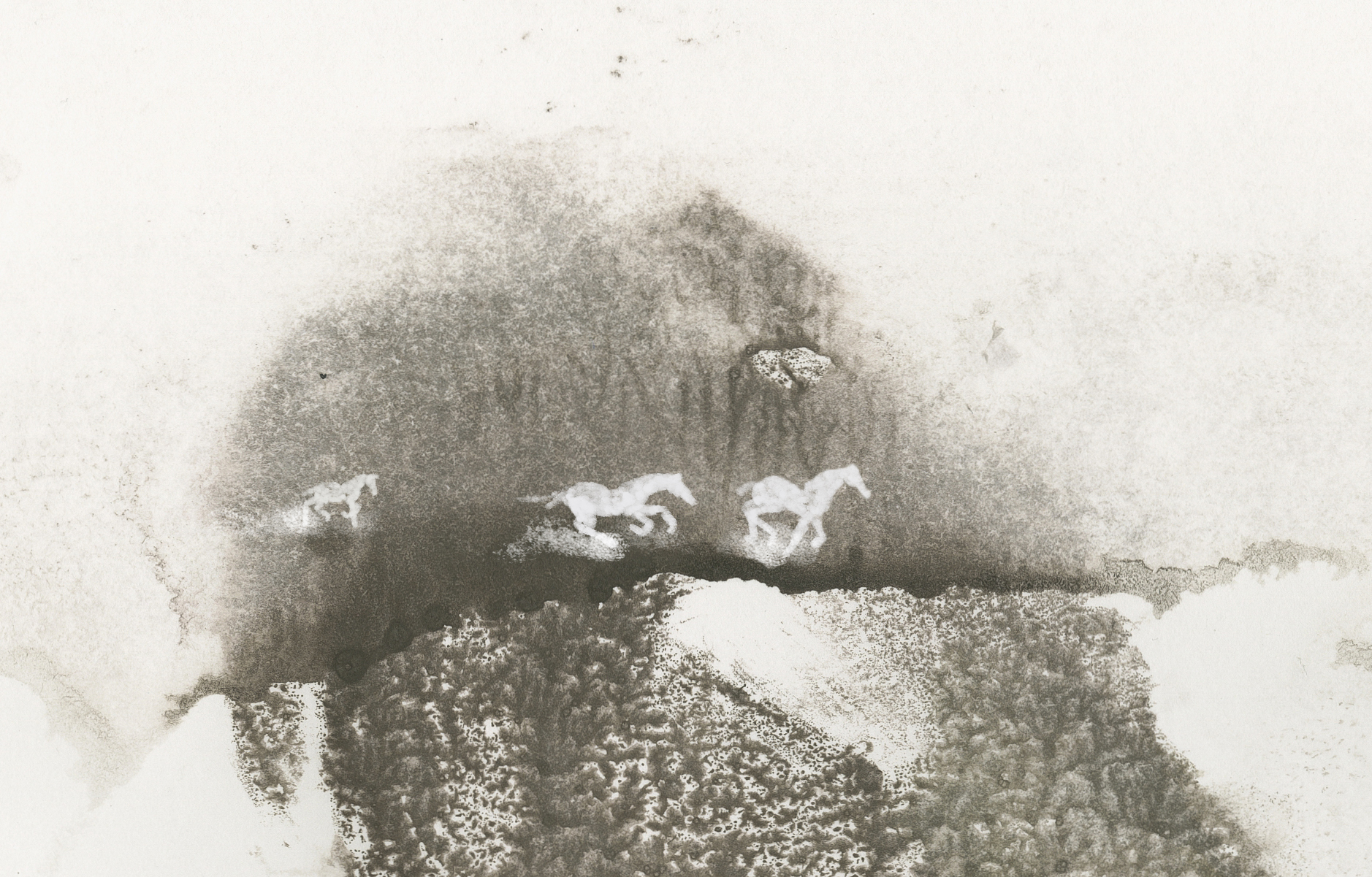 I wasn't a filmmaker yet, just somebody who had made a film

"While I was making my film, Tammo Schuringa, my mentor, continuously insisted that I think about what I was going to do with it," Myrthe continued. In one of our previous articles, we wrote about the importance of 'retroactive entrepreneurship': bringing attention to autonomous work and making money with it. How did this idea apply to Myrthe's award nominations? Her graduation work unfortunately didn't win any awards, but Myrthe was approached afterwards by two film directors, who were both interested in her next work. "The attention my film got, really felt like a lot of pressure," Myrthe told us. "I wasn't a filmmaker yet, just somebody who had made a film." At the same time, she got in touch with film producer Richard Valk, who wanted to help her show her film at international film festivals. "In the beginning you should aim high, so don't go for a local film festival first and then Cannes second."

Don't expect too much of yourself in the first year

In the end, Myrthe's film wasn't selected for these film festivals, and a potential collaboration with film museum Eye was also canceled. While many people would be discouraged by these circumstances, Myrthe felt more positive. "The fact that there is so much interest in my first film, gives me the confidence to take my future work to museums as well."
Myrthe told us that she made peace with the fact that she didn't win the awards. "The catch with an award like that is that people expect you to make a new film straight away. I can be a bit melancholy about it, but if I'm totally honest with myself, that really wasn't what I needed at that time." What Myrthe did need was a better understanding of the first small steps that she could take after the academy: "Everything changes after the academy, you have to find your place in the world." She mentioned that she would have liked to learn more at ArtEZ about applying for funding, registering at the Chamber of Commerce and the different schemes available for beginning creative entrepreneurs. Now that she's been on her own two feet for a year, she recommends that future alumni don't set their standards too high. "Don't expect too much of yourself in the first year. You have to figure out who you are and explore your path as an artist in the widest sense."

If I'm totally honest with myself, that really wasn't what I needed at that time

After talking to Myrthe for almost two hours, we learned she faced a lot more hurdles than we'd initially thought. The stress of submitting her film to competitions, the high expectations after award nominations, and the simple fact that attention doesn't guarantee success. Over the course of our conversation, we were forced to adjust the image we had of Myrthe's journey. Maybe there is no such thing as entrepreneurship without obstacles. The question is rather: what lessons can we learn from these conversations? What opportunities do we all have access to, and which ones are available during our time at the academy? Maybe it would be wise to shift the focus of the last few weeks of ArtEZ' programs to managing expectations and anxiety. How does one deal with the notorious 'black hole'? For many artists, the first six months after graduating are a time for development. What initiatives can we take ourselves? What do we create when there is no assignment or commission? The academy would do well to consider such questions, in order to equip graduates to face the world with both optimism and realism.

To help improve the entrepreneurship focus in the ArtEZ curriculum, Tim and Lars have also made a survey. With this survey, they will research the skills and forms of entrepreneurship of the class of 2019-2020. Read more here.

Previously published articles in this series: