‘The best subject there is’

Last spring Leticia van Neerven (Illustration Design) went on exchange to the University of the Arts in London, a partner school of ArtEZ. She had the opportunity to study there for six months on an Erasmus+ scholarship. But after eight weeks the coronavirus struck, forcing her to return to the Netherlands. She used the lockdown to complete her exchange programme online. In the final three weeks she worked almost day and night to finish her first stop-motion film “Immer Drinnen”.

“I realise we’re living in extraordinary times. Everything we do in daily life can be done without leaving our room; the shopping, chatting with friends, attending lectures, everything can be done online. I incorporated this concept into a poem about a boy called Immer Drinnen (German for: ‘always inside’), who does everything teenagers do, without ever leaving his room though. That poem was intended as the basis for an assignment for an illustration booklet on the theme of Generation Z.
I decided to turn it into an animation, because what better way to share a message with Generation Z than through an online video? Because of the lockdown – many things were cancelled or were no longer feasible – I suddenly was free to spend almost all my time making a video.
That endless focussing, I would probably never have managed that in other circumstances. And because I worked on the film on my own, I didn’t really have to create a storyboard beforehand. That saved a lot of time. While creating it, I just tried all sorts of things, and in the face of problems I devised solutions on the spot. I usually created one or two scenes a day, which is about 10 seconds of film. The voice-over is from an Australian actor, Cameron McKinnon. I know him from a holiday. I think his voice fits the movie perfectly. And for the credits music I worked with musician Stan Molenaar. The whole video was made in three weeks.”

Leticia has since moved on to the fourth year of Illustration Design and is doing a 2-month internship at Beast Animation in Mechelen (Belgium).
“I sent them an email with a link to my portfolio and was accepted.”

At Beast she also works on the production of stop-motions, in the construction department, where sets are made for productions. We are currently working on the pre-production of season 2 of Rintje.

You’re fully immersed in the stop-motion business now. Is that also what you want to graduate in?
“I’m deeply interested in animated films, especially stop-motion. I find Wallace and Gromit, for example, so cleverly made...... During my studies there was never time to produce a longer animation. The projects we then worked on always took no more than two weeks, so I thought it was great that the lockdown during my exchange gave me the chance to work on something longer and to make that film. But it’s not like I want this to be the only thing I do. I have a lot of energy, I’m always working on myriad things, never have a dip, there are so many things I still want to do. And there are so many things I already have ideas for and would like to work on, assignments for illustrations, my own drawings, making booklets... I like to work on projects, I focus completely on what I am working on at a given moment. Only when that is finished do I look at what I want to do next and how and in what medium I want to do that. So what will I graduate in? No idea at the moment, really. There are so many possibilities, my subject really is the best there is.”

That energy, that enthusiasm for what you’re doing, did you always know you wanted to do this?
“Ha ha, you’d think so, but no, not at all. I had no idea what I wanted. My parents are both technical, they work at Delft University of Technology. I sometimes wondered whether I should explore that area too. When I heard about Graphic Design from a friend, it piqued my interest. I had never considered that option, and checked if there were any open days. The one in Zwolle was the only one left and that’s the one I went to. Once I got there, Illustration Design appealed to me even more. Somehow it just felt really good. I was immediately excited, I suddenly saw the possibilities of something completely different.... And that’s how I ended up there, more or less by chance.”

What inspires you as a creator?
“Actually, quite a lot. I’m fond of imagery to begin with. Humour is also important to me. Lots of things involving people. In that sense, I’m very much a city person. I also like nature a lot. When I go hiking for a week, I enjoy it enormously and I can totally immerse myself in it... but that makes me relaxed rather than stirring up ideas for work. It is particularly people and the things people do that fascinate me. And more specifically my peers, my own generation, generation Z. We are the first generation that has always lived with the Internet, familiar with all its possibilities. Everything is accessible without having to go outside, you can get everything you want without having to leave your home. In that sense, there seem to be few restrictions. I think that’s both positive and negative.” 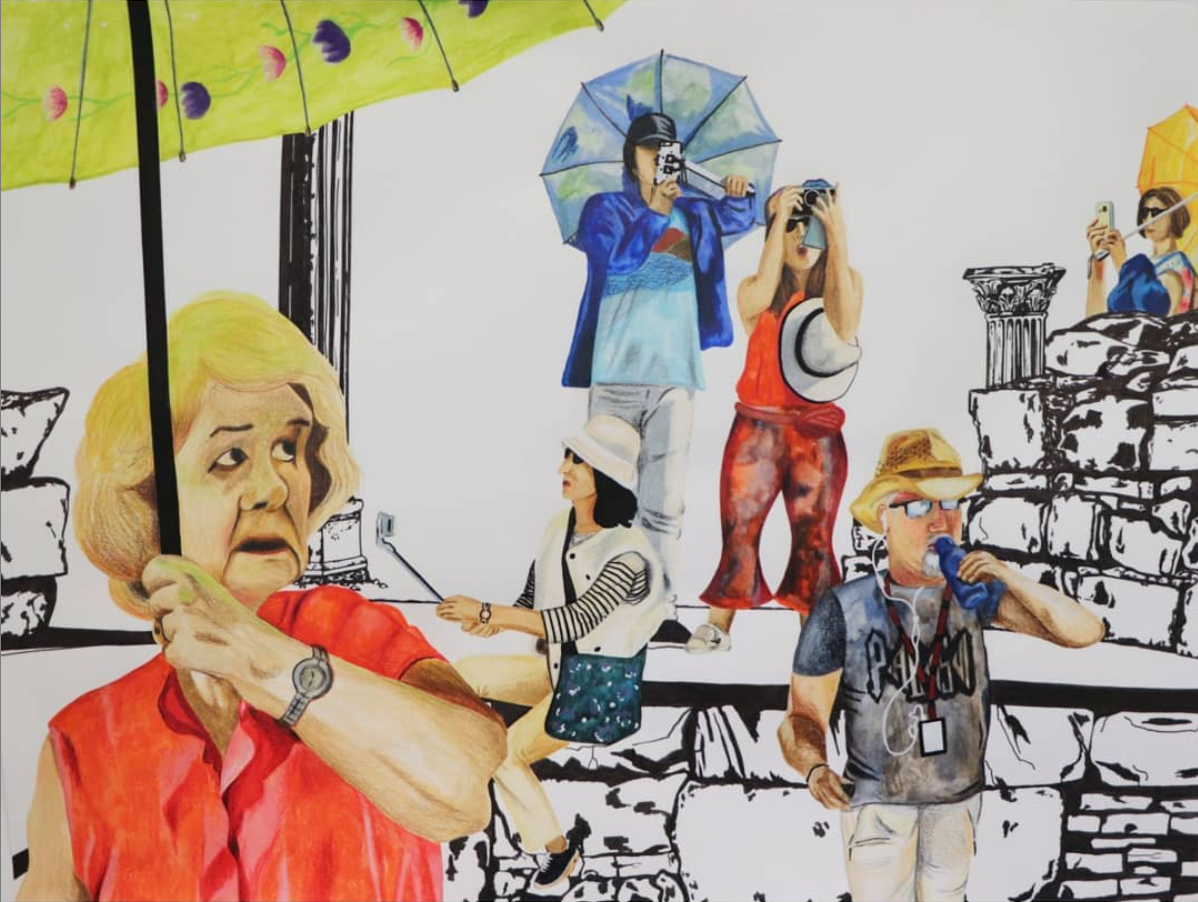