Carlyn creates illustrations to get you thinking

Finals student Caryln Westerink was hard at work experimenting during her Illustration Design course. She credits her past years at the Academy for Art & Design in Zwolle as a playground where she learned to develop her own style. “The course contains much more than just illustrating, it is also about telling stories and creating awareness through images.”

Carlyn looks back on the enjoyable time she spent studying, during which she was challenged to try a little bit of everything and develop her personal outlook on the world. “The teachers give you the right tools to do that and guide you along the way. I have developed so much.”

Living in harmony with nature

The result of four years’ worth of study is Caryln’s finals work. “That includes a book based on the theory of my research: ‘the symbiosis with an inhuman world’. It’s about the gap between humans and nature, but it is not a guide towards an improved world.” The book includes a map of a road, which allows the reader to gain another perspective on living together with nature while wandering around and observing nature. "It's a kind of philosophical game that provokes thought and awakens your consciousness," she says. 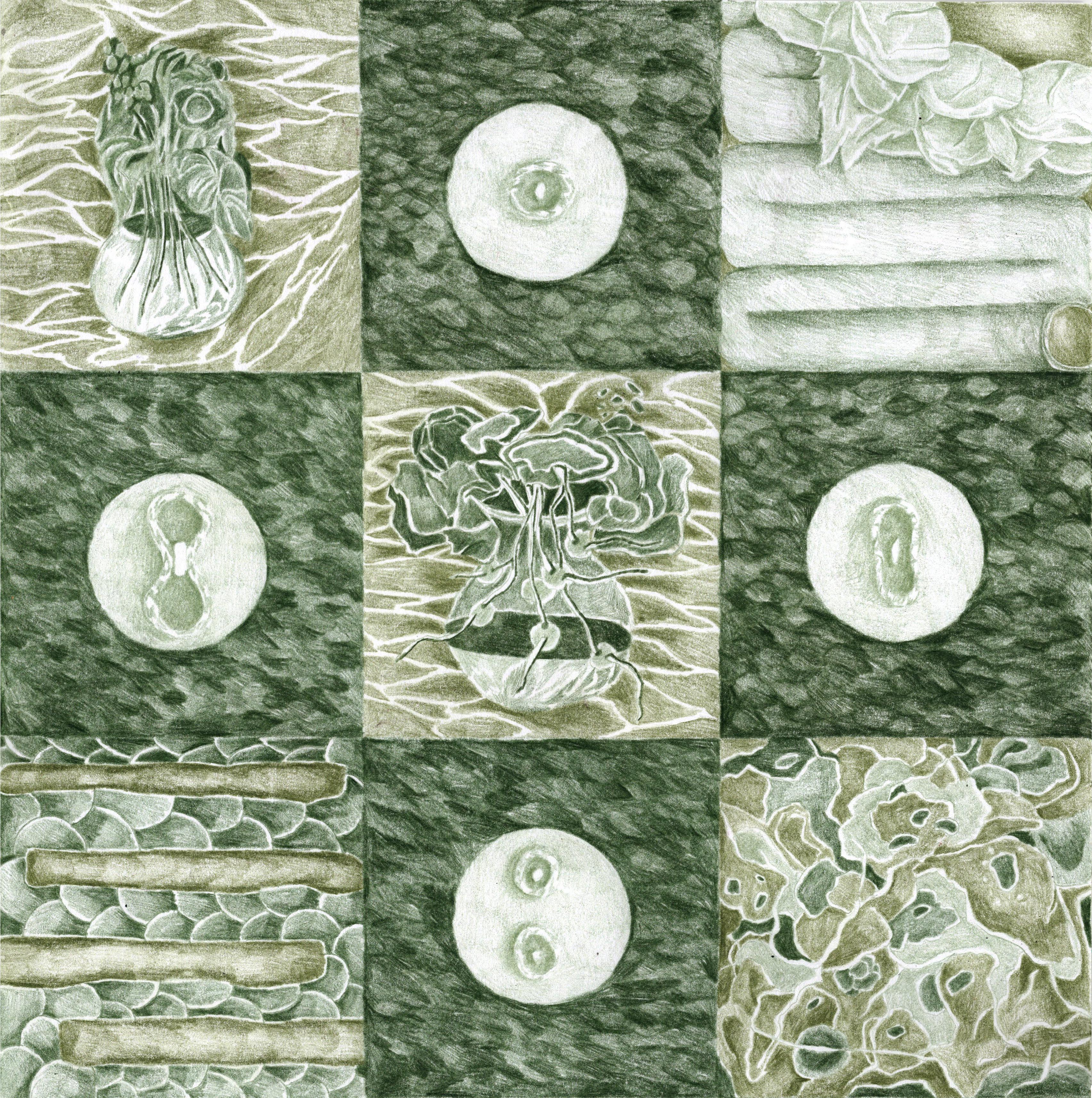 “My work sets the reader on a temperamental path.”

However, before she started working on Illustration Design, Caryln finished a programme at the Cibap Vocational School for Design. “It was a great course where I had an internship at a big film company, but I missed the human connection. The work at that MBO mostly consisted of a lot of editing.” Carlyn discovered her niche at Illustration Design after a gap year. “I love philosophising about the system in which we live. In my work I always try to build a bridge to a social context, which makes the viewers think. When I first started, I thought that I wanted to become a teacher, but I’ve actually ended up becoming quite a good illustrator.”

Her teachers motivated Carlyn to break out of her old patterns. “I’m quite thankful for that, because it was necessary to get rid of what I had learned in my previous course. It was not a fully conscious process. Originally, I painted a lot of portraits with colorful pigments and used collage-making techniques. Then came corona. During that time, I just sat at home, without any outside inspiration, and the walls felt like they were closing in around me. I had to experiment only with the objects between those 4 walls. Because I didn’t have any more room to hang things up at home, I wasn’t able to see the full extent of my work during lockdown until later, during an in-person exhibition at the academy. I was shocked by my change in style. What had COVID done to me?”

And yet, the lockdown also gave Carlyn a decided way forward in her work. “My work has become quite layered. I discovered that I like to work with graphite and lithography –creating an image by pressure from a stone. I love the versatility in my work and use lots of subtle contrasts. I feel a connection with the materials I use, which made me feel like I had a certain freedom again. I can really work for hours on an illustration. It takes me back to my childhood where I would draw lots of little houses and make up entire stories about them. With my work I want to stimulate people’s mental wanderlust.” 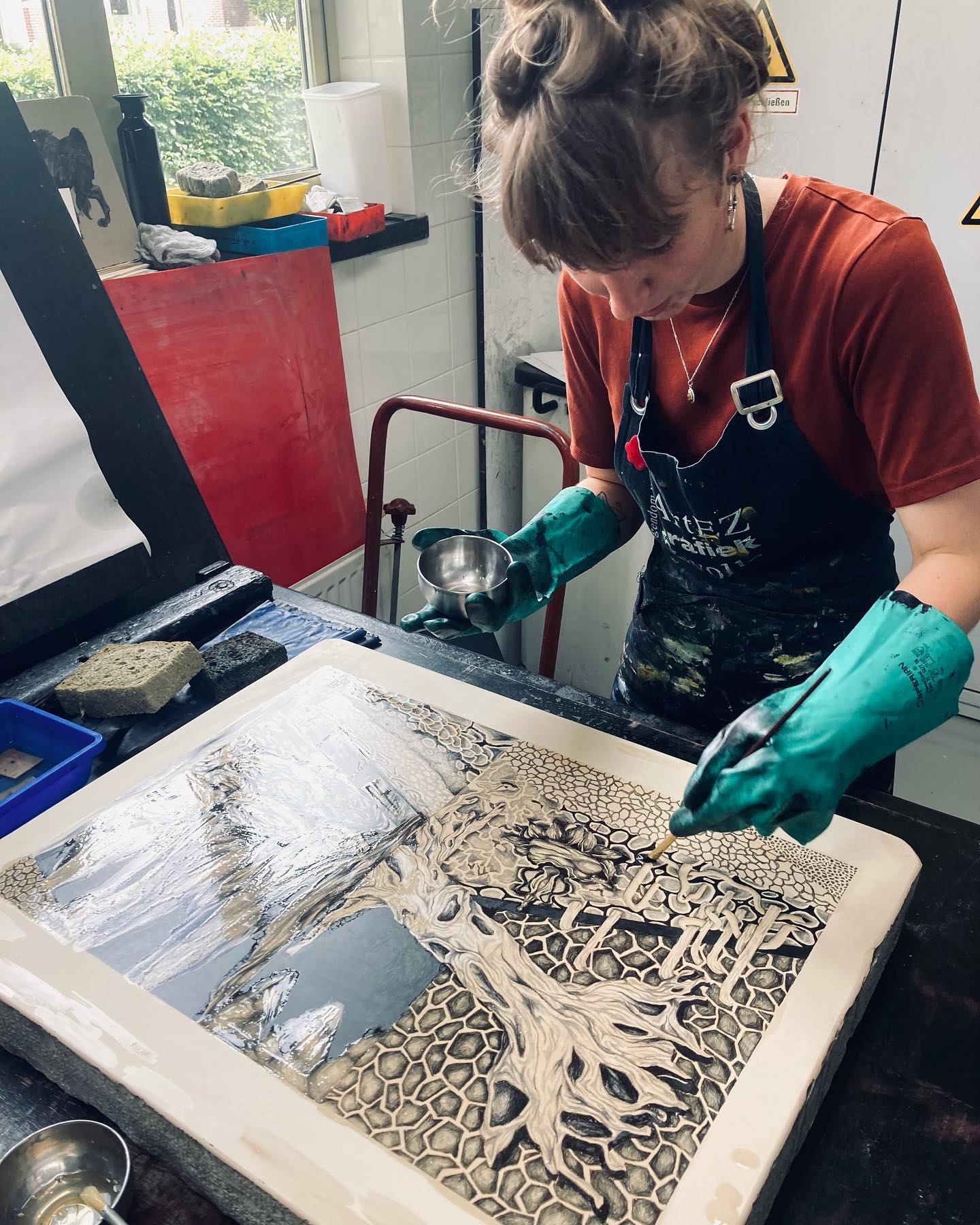 The intelligence of moss

“I hope that we as humans will start to think more philosophically instead of rationally and that we will be daring enough to look outside of our own [created] systems. My interest lies in the philosophical aspect, that people really, truly try to think more deeply and that they start conversing with each other. That they look for spontaneity in themselves and in nature and are once again fascinated by even a blade of grass in their backyard.” The conclusion from Caryln’s book is that the relationship between humans and nature is insurmountable. “Our brain tells us that we are the smartest beings on the planet. But as you look at the intelligence of moss, a plant that always adapts without dominating and destroying the landscape.... we as a society could learn a lot from that.” 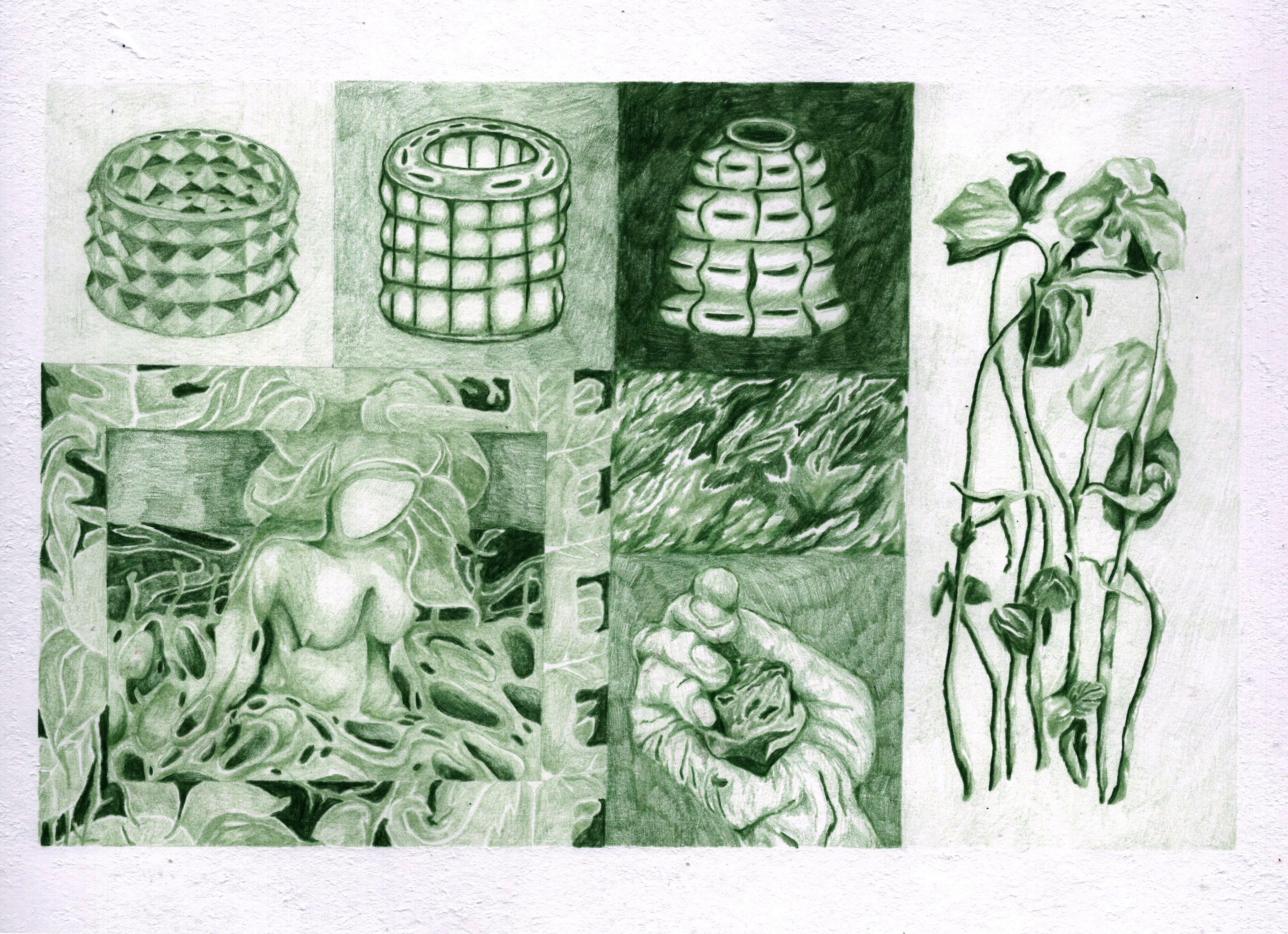 Caryln’s work hasn’t gone unnoticed. Wobby, a magazine platform, has already contacted her to publish her work. After her graduation, Caryln also wants to begin work on several interdisciplinary collaborations. “Along with the state poet of Zwolle and a composer, I founded the Wervel Collective. It opened up a new world to me even during our first collaboration. It is so enriching to work with several different disciplines. We already created a performance on the future of value systems in collaboration with the Museum de Fundatie and Biobased Creations, and an installation about freedom at the Liberation Day Festival.” After the summer, Carlyn is moving to Amsterdam for a Master’s programme in Art Education or the part-time course in Fine Art & Design Education. “I’m going to be a teacher after all!”