The journey of Simone Trum

Every career in the art follows a different route. In The journey of column of the ArtEZ Business Centre, teachers will tell you about the key moments in their career. There is rarely much time to discuss this in class - but now, you'll have an opportunity to find out what choices they made, and how they got to where they are now.

I founded graphic design studio Team Thursday with Loes van Esch. We both graduated from ArtEZ Arnhem in 2008 and we've been working as a duo since 2010. In our work, we specialize in designing graphic identities in the widest sense of the word, ranging from books to events and exhibitions. We also host irregular exhibitions of designers and artists in the front room of our studio space TTHQ in the Gouvernestraat in Rotterdam. I teach the Typography course at ArtEZ Arnhem.

Loes and I were classmates for 4 years in Arnhem. We both knew that we wanted to be independent designers after graduating from the Academy, but we never seriously thought about working together. That only started when we both joined the Typography Workshop / ISIA Urbino Summer School in Urbino, Italy. Together with some twenty other early-career designers, we spent a summer isolated in a small town on a mountaintop. Everyone worked hard, but there was also a lot of time to get to know each other.

Loes and I soon found out that we had a lot of shared priorities when it came to design. Although we had always had very different ways of working at ArtEZ, we realized we complemented each other well. After all, there isn't much added value to collaborating with someone who can do exactly the same things as you. We started working on a project together in Urbino, which went very well. Then we decided to see what would happen if we spent one day a week working on projects together. We saw a lot of our friends starting collaborations, but quickly 'breaking up' because of major disagreements. We didn't want that, so we took things slow. In the year that followed, we designed a lot together, but we also took our time to work out all the practical stuff: administration, starting a partnership, the division of labor and time, etc. It became clear that we really were a great match. After that, we truly got started as Team Thursday. 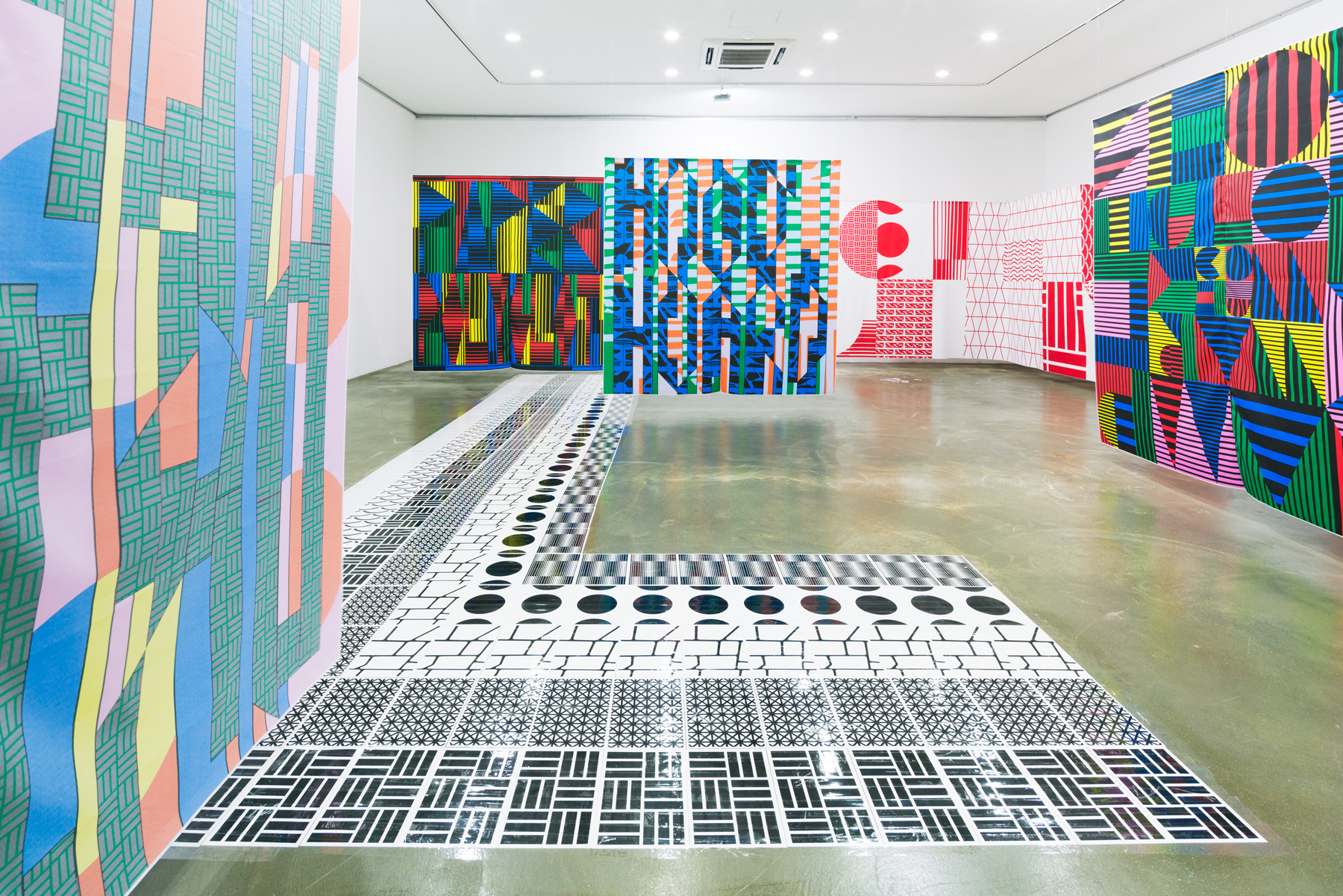 When we were just starting out, we both applied for a Starters' Stipend: a scholarship for early-career designers (now the Creative Industries Fund NL Talent Development grant program). We worked tirelessly on the application. It was a little scary to write, in part because there was the risk of rejection, but also because we were forced to define our future plans in detail. In hindsight, doing that was very helpful. When I heard we'd both gotten the stipend, Loes was living in New York for a couple of months for an internship. It was the middle of the night there, so I went ahead and called her entire family to tell them the good news.

During the summer school in 2010 in Urbino, Armand Mevis gave us the advice to never stop, just keep going, even when it's hard or when you're uncertain about everything; just keep going. Simple as it sounds, this advice has been very valuable, and it's kept us going to this day.

Meanwhile, I literally had €100 left on my account, and in retrospect I can't tell you how I was planning to pay my rent if we hadn't gotten the stipend. I hated the idea of getting a part-time job so much that I stubbornly refused to do it. Anyway, it was amazing to get the grant, especially since we could now invest all our time into renting a space, setting up the studio, experimenting, and buying equipment (our first purchases were a laptop, printer, scanner, and camera). And we really made the most of this time to develop our own work and our methods, because we weren't dependent on commissions to survive. 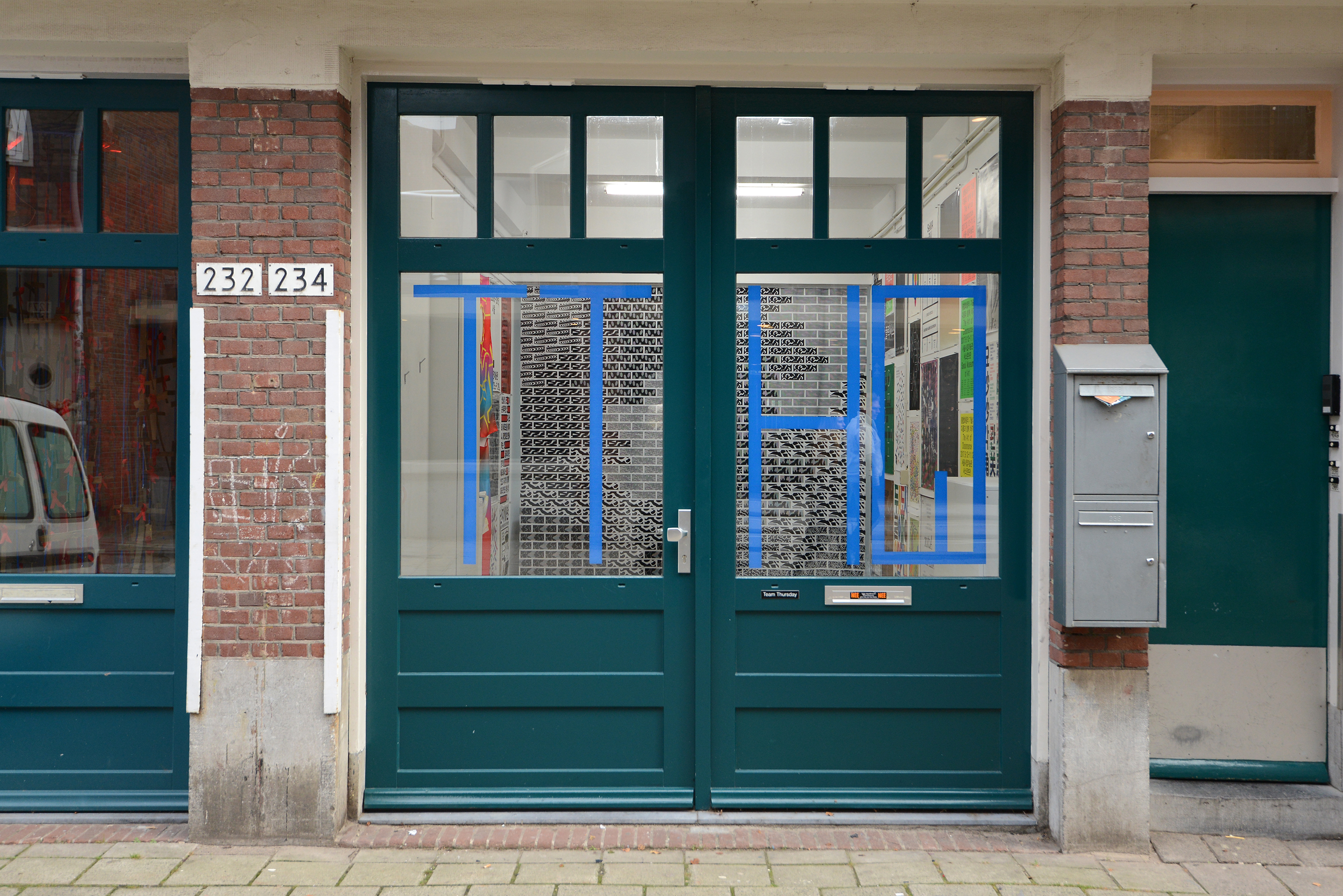 Our first big commission came through a former teacher, Hansje van Halem. After we graduated, we'd paid her a visit once, and after seeing our work online, she referred the client to us. The Great Indoors Award was an international award for interior design, and they asked us to design the communications (flyer, handout, digital). During the process, it became clear that there was much more work to be done. Together with Eventarchitectuur, we designed the entire award ceremony. It was great for us to work on so many design elements for a single commission, but we also made mistakes. Because we hadn't clarified the scope of the commission, we had to work way too hard towards the end - we barely got any sleep and spent day and night in the studio. The first days of the event, we were so exhausted and anxious that we missed a lot of the action.

After our first briefing, we were asked to make a quotation. We did this without asking anyone for advice (which, if it's your first time, is something I would recommend). For the printing work, we decided to charge €5500, which seemed like a colossal amount of money at the time. But compared to the amount of work that was expected, it was actually far too little. We eventually brought it up with the client, who offered to round up our pay to €6000, and that made us realize we had totally undersold ourselves... We then pointed out that the quotation had specified significantly less work than we ended up doing, and we got some extra money, but it was only because the client happened to be so flexible. Since then, we've always gotten input from colleagues on our quotations and whenever we're asked to do work that isn't specified, we bring it up with clients right away. It should always be clear what exactly you're getting paid to do. 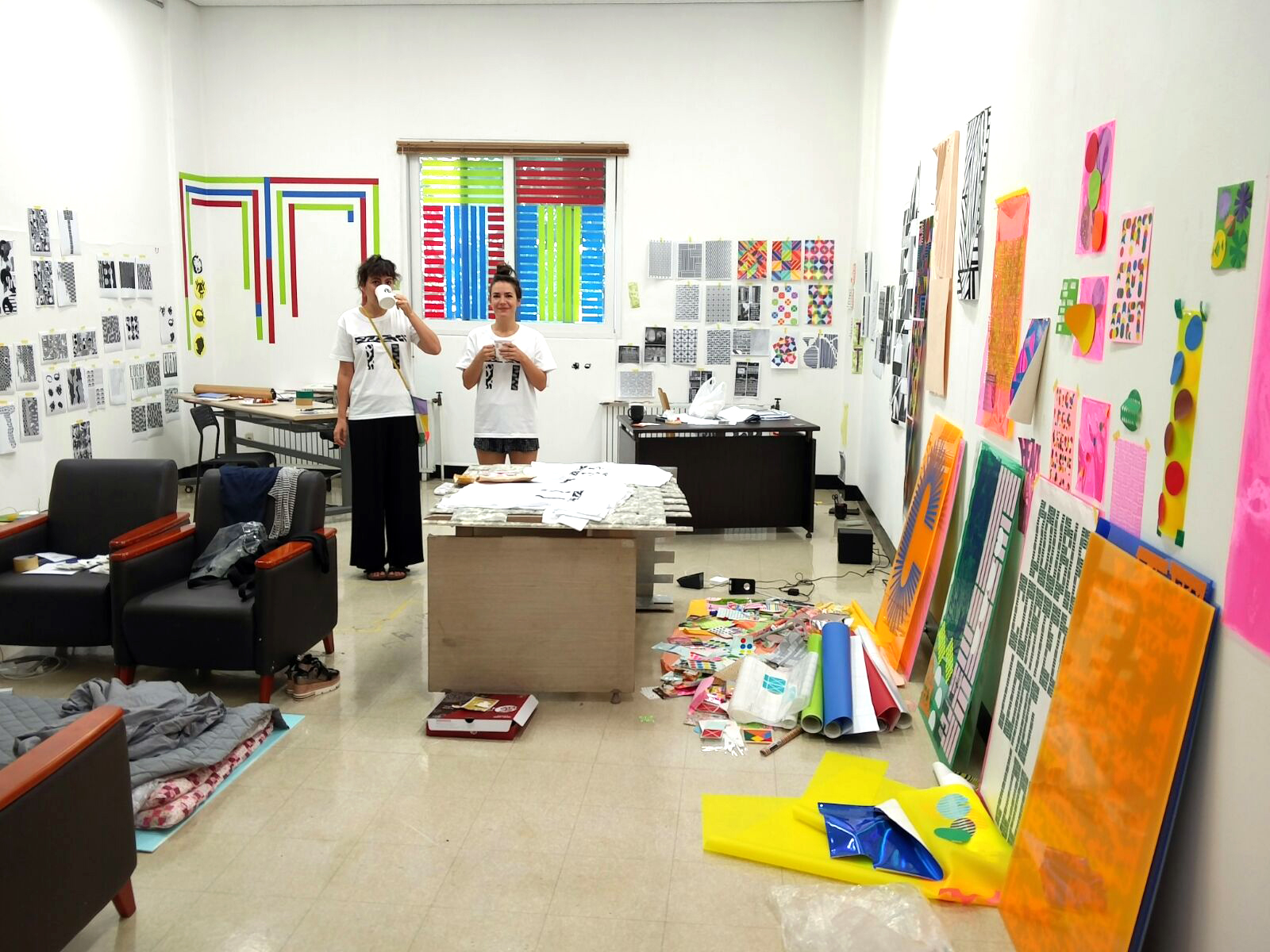 In 2017, we moved to our current studio in the Gouvernestraat in Rotterdam. Before that, we were always sharing our spaces; this one is a garage box that we have all to ourselves. The rent is a little higher than we were used to, but it's still manageable. We try to keep our fixed costs as low as possible (low overhead means less dependence on ongoing commissions), so this was quite a big step for us. But we're very happy that we got the space. There was enormous interest, more than 100 people wanted to have a viewing. We called right away and asked for the first possible opportunity to check it out. And we told them in advance that, if we liked it, we would decide right there and then. That's how we were able to rent it.

The space is big enough that we could hire people to work with us (which we only want to do when we're too busy), but there is another unforeseen advantage. We can clear out the front room of the studio and do all of our work in the back. That way, we can invite artists and host book presentations or exhibitions in our studio. This gives our space a public function in Rotterdam, and because it faces the street, a good number of people show up. It's very cool for us to do this; we get to know new people, but we can also engage with our profession from an organizer's perspective. 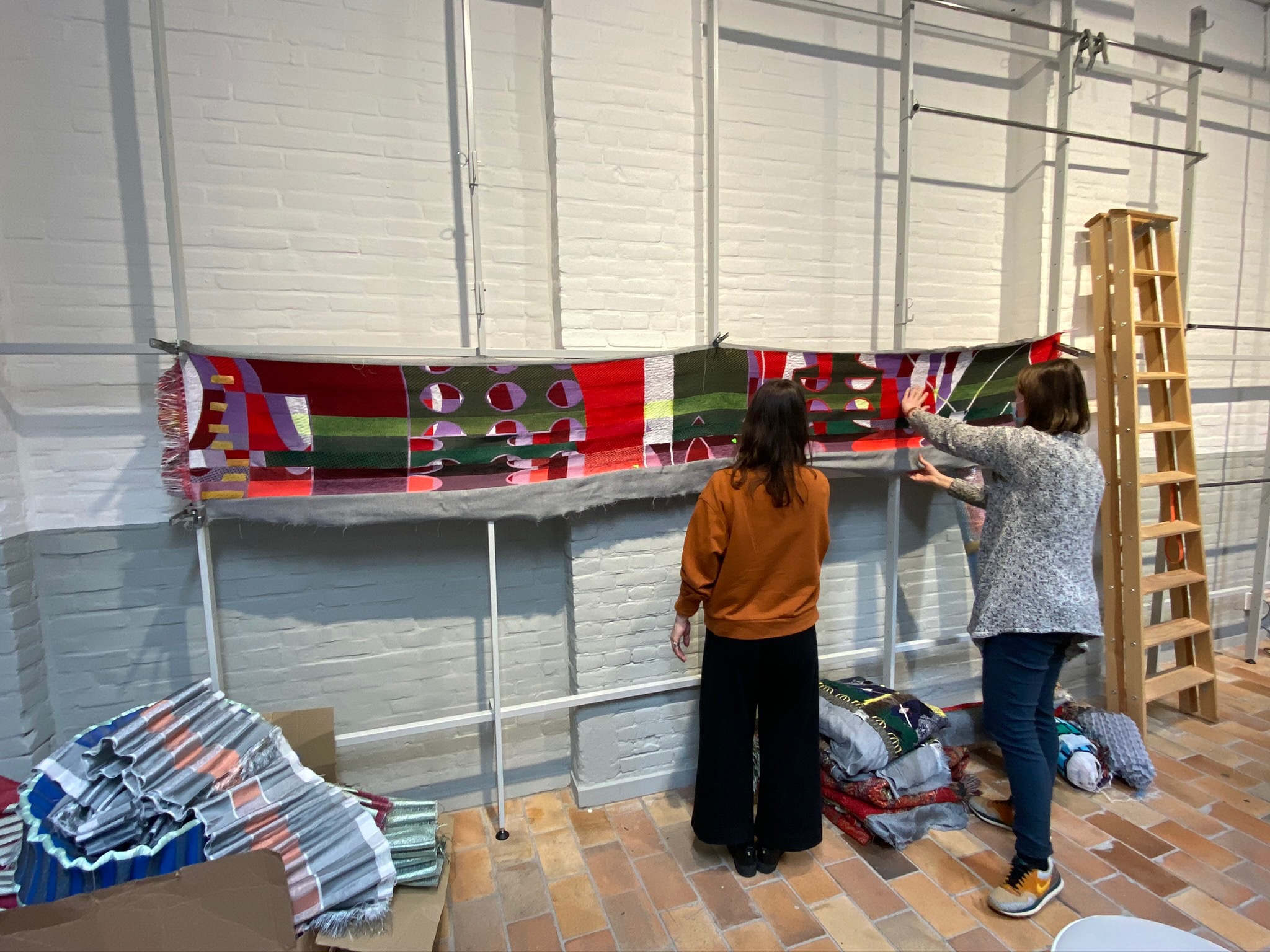 In 2017, we also applied for a residency in Seoul through the Creative Industries Fund. We could stay and work in Seoul for a total of five months. Because we're a duo and we still had to work and teach in the Netherlands, we split ourselves up: Loes worked largely in the Netherlands and Simone went to Seoul first. During the holidays, Loes also stayed at the residency for two months. It was an exciting step for us. But it was also challenging: as graphic designers, we have to take our clients' planning into account. Deadlines are spread out all across the year. We decided to cancel a few commissions so we could concentrate more on the residency. In the end, we're very happy we did it, and we realized that when we really want something, we should do it no matter what. We found some new clients locally in Seoul and we were also able to work on our own projects. Because we were there together and worked and slept in the same space, we could spend all our time designing, which felt like such a luxury. I sometimes still miss the open approach that we had back then. We still have a lot of connections in Seoul and also some commissions, and we'd love to go back. 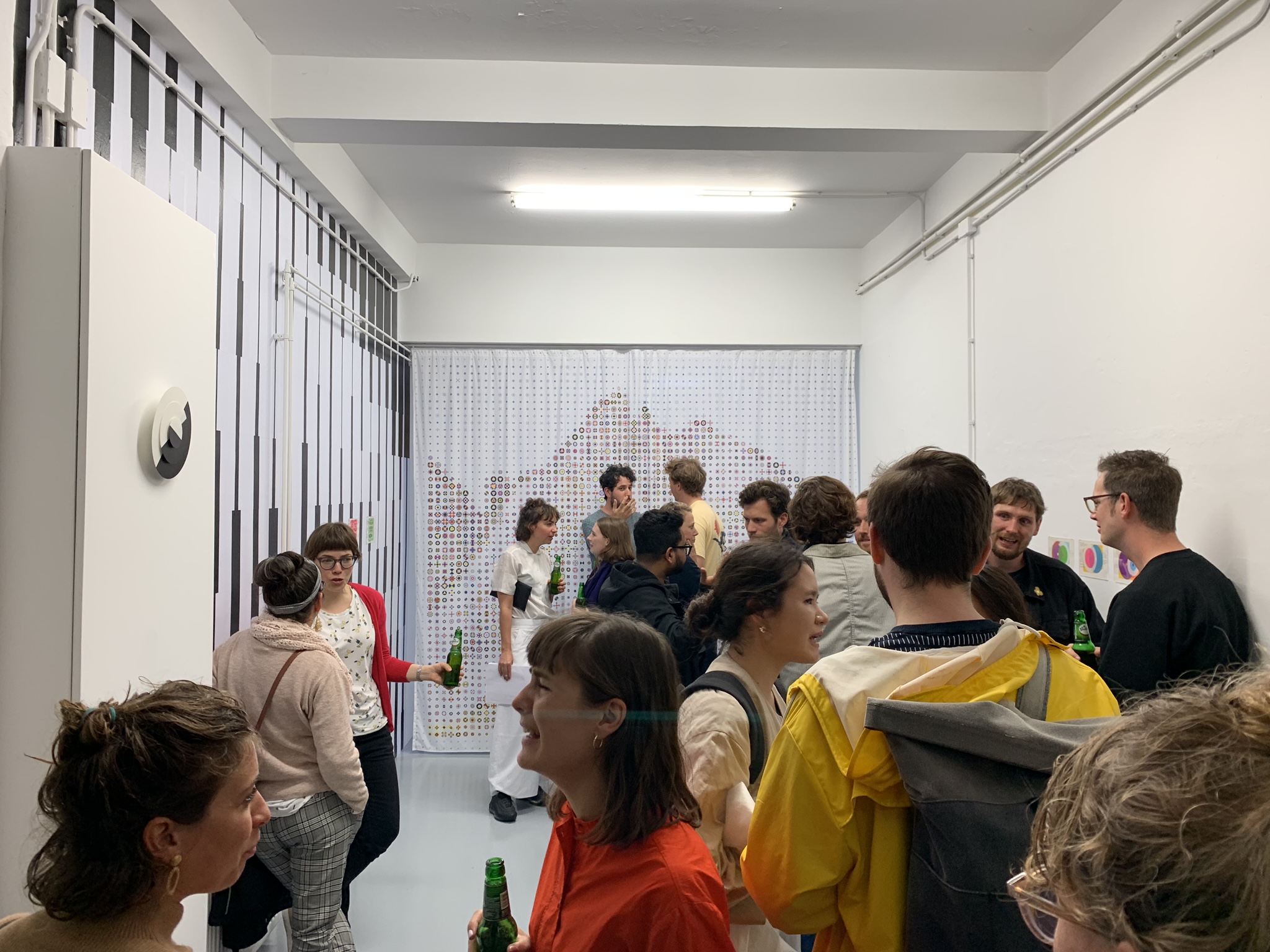 We realize how lucky we are right now, that we've been working together for a while and we have returning clients. We had enough income over the past year, especially thanks to design commissions for books. Early in 2020, we had a lot of extra time to focus on research, which was nice. But we also had a few cancellations. We designed a visual identity for a film festival that would have happened in late March. All the design work was done, but nothing was ever produced. Another exhibition got moved to this summer and a third exhibition, in Seoul, changed their plans: we would have curated the whole exhibition, but since we couldn't go there physically, we gave back half of the commission.

The past year has been a slightly more extreme version of the already quite precarious existence as an independent studio. We've had cancellations and withdrawals before, but now, it's much more common. In the beginning, it was tricky to stay balanced and keep a positive perspective. The commissions we're most interested in (mainly work on a bigger scale) are very difficult to get now, so we decided to focus on our own projects. We're collaborating with the Textiles Museum on weaving a curtain of 4x10 meters. We're doing a lot of materials research, since we've never worked with woven textiles before. We're really learning something new, and we hope that the curtain will lead to other large-scale spatial design commissions.

Other than that, we designed a book with letters inspired by pattern bricks we found during our residency. We're going to publish it and pay for the production ourselves. We saved some money for this and hopefully, that will lead to new work as well. During the summer school in 2010 in Urbino, Armand Mevis gave us the advice to never stop, just keep going, even when it's hard or when you're uncertain about everything; just keep going. Simple as it sounds, this advice has been very valuable, and it's kept us going to this day.

We interviewed Simone Trum alongside Ratna Ho (Fashion Design-Arnhem) and Douwe Dijkstra (Illustration Design) during the (online) meeting of the Community Cultural Entrepreneurship of the ArtEZ Business Center.