‘I never expected to make such a personal end product’

Aiden Yoon’s time at Comic Design was a major quest. For style, for resources. But also for identity. It resulted in a graduation work that others can also find support in. ‘It’s cool when my work makes people feel they’re not alone.’

Aiden Yoon is the name Aiden chose for themselves, and in this story we refer to Aiden with who, they, their and them. After a long search, Aiden has found that they are most comfortable with a non-binary gender identity. Not a boy, not a girl, just Aiden. Their graduation work is called LOS and is the most personal work Aiden has made at ArtEZ. ‘It is the story of that beginning search for my (gender) identity, the reactions of my family, what this did to me and the role music played in it. How new things came on my path that I myself could not fully accept at first, but eventually embraced. A story about growing up, spreading your wings, developing your own ideas, discovering new things and getting to know yourself.’ 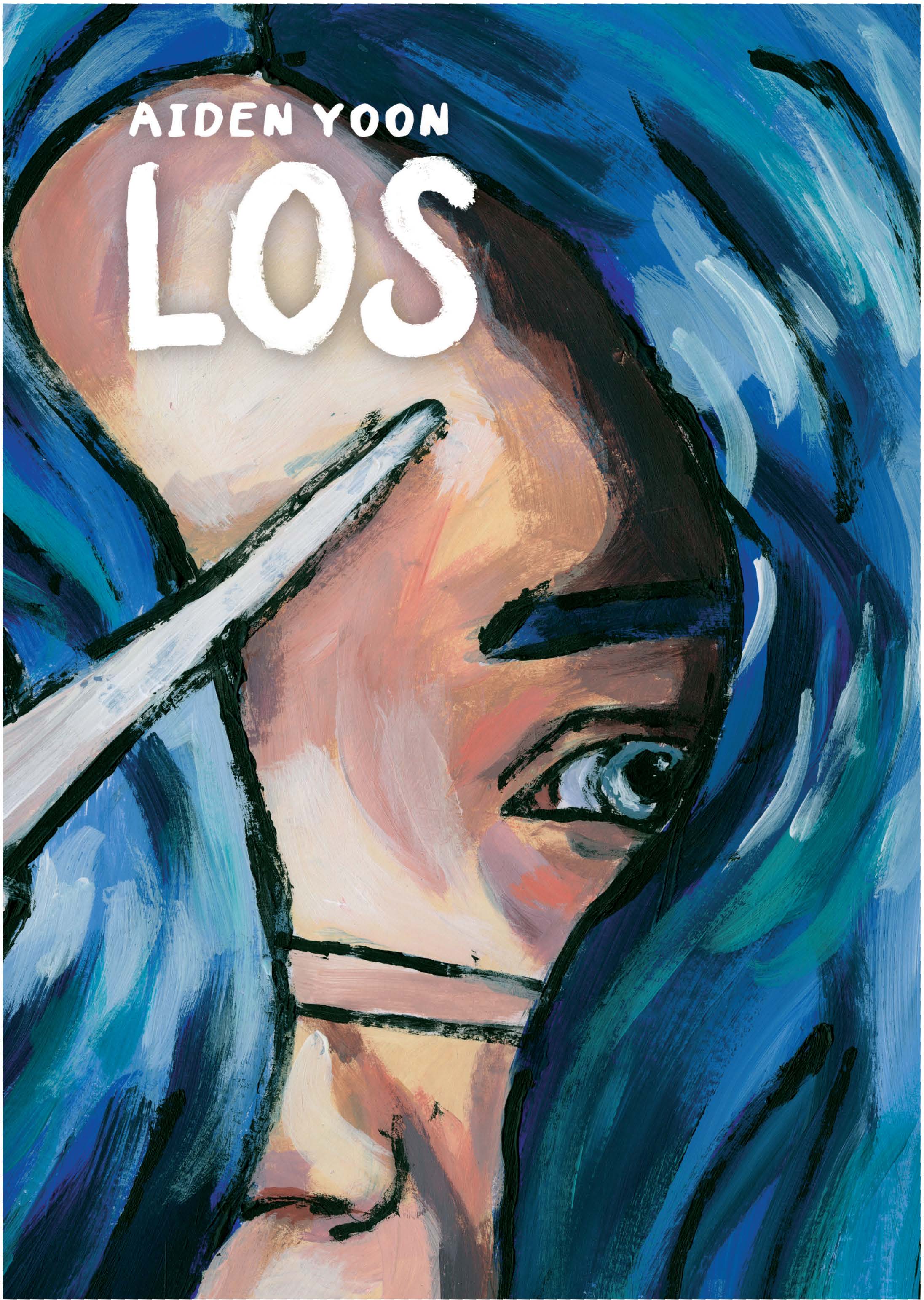 ‘You do have to remain a girl’

The starting point of this search are some seemingly small things that were said to them several years ago. Things like: ‘You do have to remain a girl.’ That doesn’t seem like a big deal, but it affected me greatly. For my graduation, I tried to turn those kinds of experiences into an intimate story. I’m glad I did, because now it’s out there. It’s out and it has a place. By creating this work, I found words for my feelings for the first time. So that I could explain to others, but also to myself, what exactly was the matter. I also never expected to come up with something as personal as this. I’m pleased with how I managed to portray my quest and communicate it to others.’

Aiden’s story is one of searching. For example, Aiden spent a long time trying to figure out what they actually wanted to do. ‘I did figure out very soon that it had to be something creative. That’s how I ended up at Comic Design at ArtEZ after some searching around.’ Aiden was already writing stories, and painting and drawing a lot, but had never combined those things. ‘That seemed really cool to me. I then took the plunge and only signed up for Comic Design, and luckily I was admitted.’

In secondary school, Aiden was always somewhat of an outsider. ‘I didn’t have any close friends. But that changed at ArtEZ. On the very first day I met Jits Tetteroo, who would later become my good friend and who greeted me enthusiastically and talked to me with an open mind. I wasn’t used to that, but I found it a very positive experience. That also applied to the rest of the people. Everyone was very friendly and open. That atmosphere persisted throughout the duration of the course.’

Being able to hold materials

If you do Comic Design, you work a lot with Animation Design. You do theory subjects together, as well as individual research, art history, philosophy and design. ‘But we also now arrange all the work around the final exhibition together. There’s a lot of overlap between the two studies, and we work in good harmony.’ Still, Comic Design suited Aiden better. ‘I’d rather not concern myself with the technology required for animations. I like to work quite traditionally and like to be able to just hold materials. That’s a good fit for Comic Design.’ 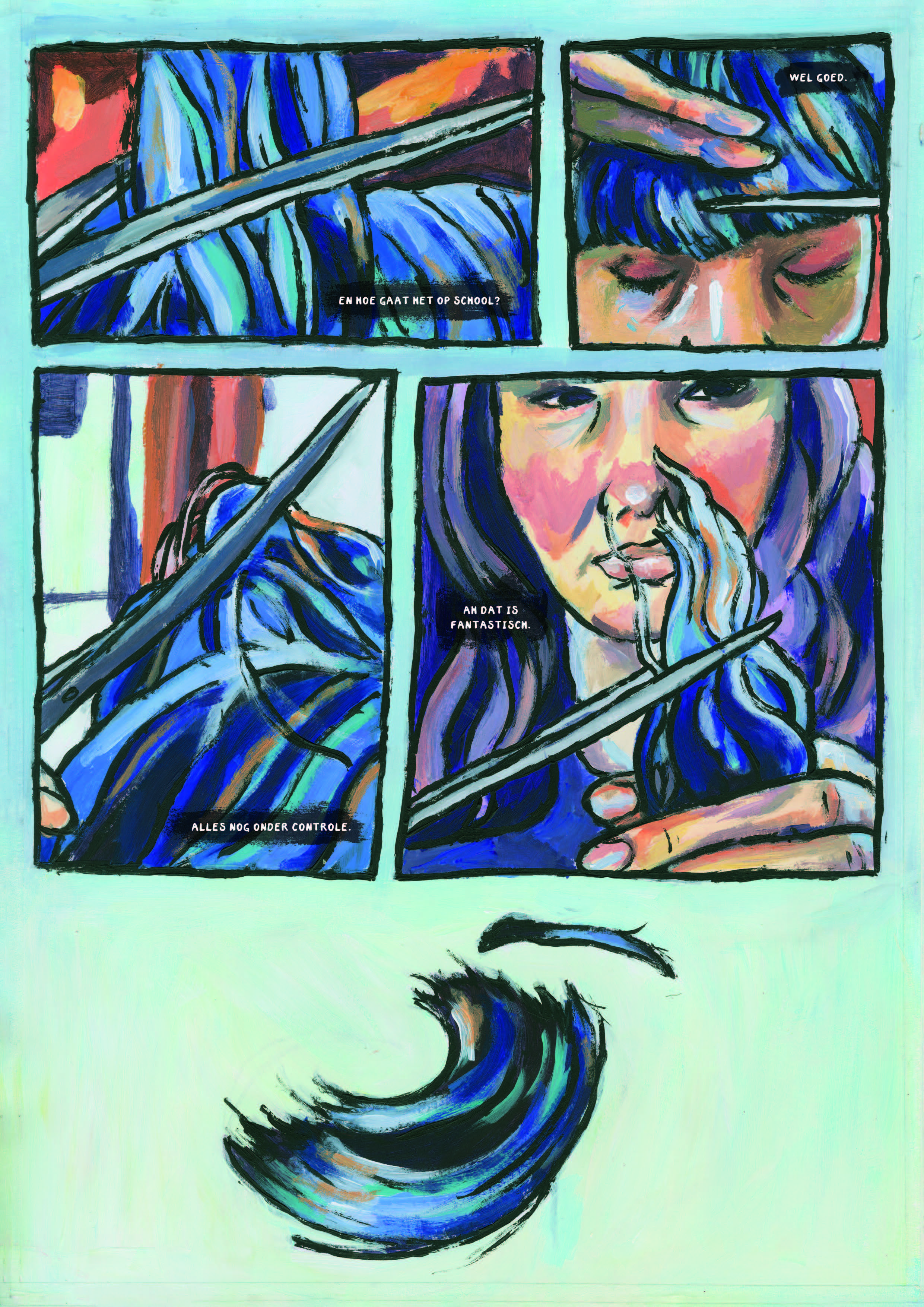 One person thinks this, another thinks that

Aiden has benefited greatly from the Comic Design lecturers. ‘It’s nice that they come from the field and were able to talk about what they experienced in it. The feedback I received was instructive, but also difficult at times: one person thinks this, another thinks that. It is difficult to find your own way in this and to substantiate your choices. But it’s also one of the most important lessons I learned during the course.’ Especially in such a personal work as Aiden’s, criticism can come as an unexpected blow. ‘So I created some distance from myself by giving the main character a name other than myself: Aiden,’ says Aiden, who at that time was still known by the name of Angela. ‘That way I was less vulnerable to feedback from lecturers, and I could respond more seriously to criticism. During my graduation period, I embraced my identity, choosing the name Aiden for myself in real life as well.’

Aiden makes art for themselves, but also likes to share it with others. So that others can benefit from it, even if only a little. ‘Now I don’t know to what extent I’m going to reach people with LOS but that is my biggest goal – that people find support in it and think: okay, I’m not alone, there are others like me.’ Aiden is going to send LOS to a publisher so it can reach more people than just friends and acquaintances. My lecturers also advised me to approach organisations that are concerned with these kinds of issues. They might want to make educational materials out of it.’ No matter what happens with LOS, Aiden continues to write and draw: ‘Because that’s what cheers me up the most and makes me really happy.’

Like the other graduates of the Comic Design course, Aiden has a (Dutch) student page on our finals-site. Go there for more information about their graduation work.