‘I was prone to ignoring the advice of the teachers’

It has become an artwork, the great experiment of Gijs Kreutzkamp: a  24 page cartoon of The Adventures of Captain Geis. It is an impressive culmination of four years of  Comic Design in Zwolle upon which Gijs has worked hard and is proud of. “Making comic books is fun but also a lot of effort.”

It requires a lot of work to make a prototype and to write an essay as a companion piece, says Gijs. “This takes the whole four years and requires full-time commitment. In the first semester you work on the storyboard, in the second semester you convert the storyboard into a full cartoon.”

Contributing to the genre
The essay is the result of a three and a half year Individual Research. Students reflect upon their work throughout their study and answer the questions: what is my story and why is that my story? Gijs: “My Master Prototype is a tale of pirates and an adventure story. I had to answer to why I wanted to make a comic book about pirates. What could I add to the adventure genre? Then you have to write a mandatory essay in two weeks. In this way it becomes an accompanying essay to the master prototype.” 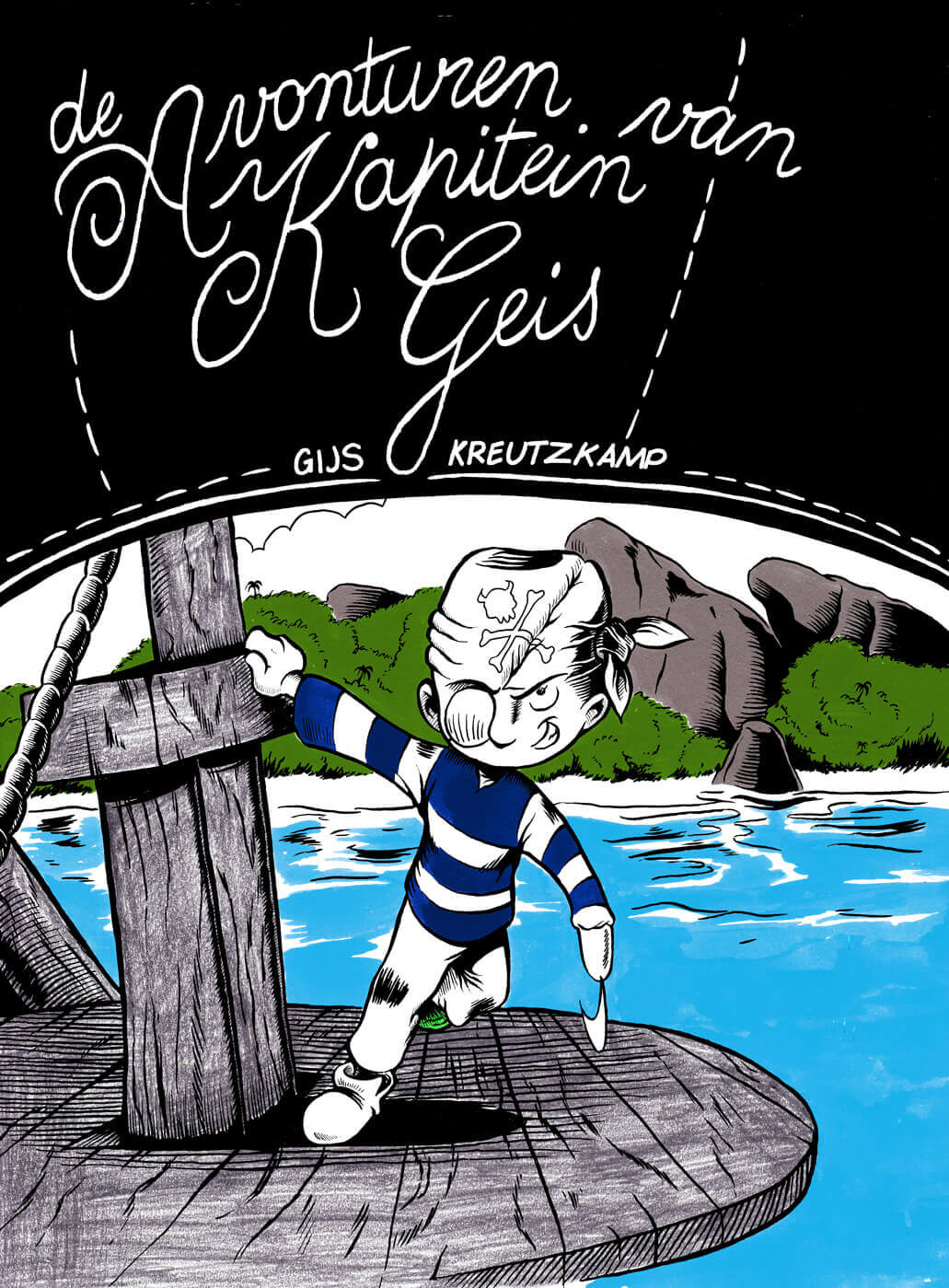 Difficult to make
As a medium cartoons are very accessible, but people often forget how much time it takes to make something accessible. They think cartoons speak for themselves, while the rule tends to apply that the easier something appears to be, the harder it is to make, and the more work is required. Take for instance the ‘inking’ of the pages – going from pencil sketches to ‘tight’ ink drawings. “That is true monk work that I was absorbed in for a long time. While drawing you always work on a large scale that ultimately becomes the final product. My master prototype has appeared in A4-formaat, which has meant that I worked on an A3-formaat. That is extremly labour intensive. Making cartoons is fun but also a lot of work.”

To keep thinking for yourself
ArtEZ is the only cartoon program in The Netherlands. Everyone here is crazy about cartoons. Gijs remembers the entrance examination. After lunch every one randomly grabbed their sketchbooks and began drawing. “I am not the only one who does that, I thought.” A cartoon study is very good for you, Gijs believes, but students have to keep thinking for themselves. “Teachers often want to imprint their own ideas. This can be good, because they often have valuable things to add. Sometimes, however, it can be good to ignore such advice. You become an autonomous cartoonist, then you no longer have a teacher who is watching your progress from behind you.”

Lucky
From the teachers Hanco Kolk and  Sam Peeters have inspired him most of all. Hanco knows how to convey his love for the discipline, he is a true craftsman. Sam is a tutor who encourages experimentation and in doing so makes the most of your talent. “They both have the right attitude: making cartoons is fun, what an stroke of luck that you are allowed to do make money out of it!”

To keep drawing for ever
Now that Gijs has graduated he will start working. As a cartoonist, he has the skills for a wide variety of professions. He can make cartoons as a freelancer, ut can also make illustrations for magazines, or cartoons for newspapers, or apply his talent to ‘summarizing draughtsman’ at congresses, and so on and so forth. “Everything that needs drawing I can get to work. I don´t know yet exactly where that will be. I do know that I will be drawing.”