First, I’d like to shortly introduce myself, my name is Heike Renée de Wit, last year I completed the graphic design program at ArtEZ Arnhem and I followed university minor courses in gender and postcolonial studies. I consider gender ambiguous and therefore allow myself to be as such (also: queer/non-binary/androgynous) and currently live in Arnhem. My practice is a mix of graphic design and theory related to gender- and postcolonial studies. More specifically, I’m interested in autonomous and collective projects concerning narrative and representation as norm-shifting tools. I like to research and create rituals, philosophies of life and explore the connection between nature and humanity. I seek ways of collectivity that bring us closer together, to our environment and thereby to ourselves, and I explore how graphic design can support my own and other’s missions of similar intention. I am idealistic and work to find ways to maintain energy and softness within the roughness of society.

The death of an idea leads to new life

My methods and references for relating to and reflecting on the process of transformation of the subconscious to awareness.

What I read and watch form the greatest sources of inspiration to my work, they interconnect as a web of references and generate new links of thinking. These connections are what interest me most, and through I try to grapple questions such as: How do we deal with collective trauma? How do we recognize and heal from (our own part in the) oppression (of others)? What constructs do we unconsciously perpetuate (like gender and ‘race’) and how can we trace back those hierarchies and deconstruct them? How can principles of masculine and feminine ‘energy’ help us reconsider gender? How can I, as a designer and human, facilitate growth of awareness, in myself and in others? It is that last question that I want to engage with most right now, in order to share which tools I use in moments of feeling overwhelmed in processes of developing conciousness.

During the year after my graduation a lot has happened, and the freedom I experienced during my graduation process has now become a design problem for the current graduates. On a widespread scale, we are dealing with seemingly conflicting feelings as a consequence of the Covid-19 pandemic, where new behavioral norms are demanding a revaluation of solidarity and ask for reinterpretation during global protests against systemic racism and police violence. In this current moment I feel a lot of positivity due to the creativity, endurance and resilience of people, where earlier I felt overwhelmed by worries. Mourning flows like a constant through it all.
Just as the pandemic developed our growing awareness of our collective vulnerability and mortality, the protests are causing yet another wave of reckoning with inequalities, and make clear our complicity if we don’t actively improve ourselves and our societies. Improvement through for example talking to people close to us about discrimination, sharing experiences, and if you have never known oppression, by continuing to listen, read and be there for others in supporting them both interpersonally and politically. Let us explore new ways of being together, and act in accordance with our ever growing understanding. I don’t want to suggest the above list is covers all possible improvements, of course.

What I do hope to be able to achieve with my work, is to aid the understanding of complexities, and to clearly dissect particular ideologies surrounding gender, skin color, ethnicity and other forms of inequalized difference, through concrete examples of how those inequalities are constructed. It’s one thing to hear me say that I think humans and nature are one and the same, because bla bla bla here goes another leftist eco millennial, but it’s hopefully another thing for me to explain how we’ve come to the point where we all assume we’re not on equal footing. If reasoning brought us here by logical progression, I’m curious to see what we encounter if we retrace those steps.
In my graduation project Paratext Publishing[1], I explored the judgements complicit in the logics responsible for inequality. I brought together fiction and academic literature, to contextualize the negative narrative representation of colonized people in English literature, and to uncover the underlying power relations that were both the cause and the result of that. Consider the character of Bertha, brought from the then-colonized Jamaica, in Charlotte Brontë’s Jane Eyre (1847): Even in feminist readings, she is reduced to a narrative element in the service of protagonist Jane. Academic Gayatri Spivak unpacks these and other readings of Bertha’s character in “Three Women’s Texts”[2] and author Jean Rhys gave Bertha her own story in Wide Sargasso Sea (1966) and illustrates how we can use the same tools to invoke her humanity.
Some of the bundles house a hope and appreciation for the reclaimmation of language, and the reinvention of the self through that process. Like a bundle where Gloria Anzaldúa instills in oppressed women the power of describing their experiences[3], where Audre Lorde exemplifies that in Sister Outsider (1984) and where Adrienne Rich joins them in a plea for the importance of recognizing your given (dis)position[4]. In other books, scholars trace ways of seeing, as they emerged from the author’s pen and flowed into the eyes of readers, taking into consideration the fact that books from the English literary canon were applied as civilization techniques in its colonies.[5] 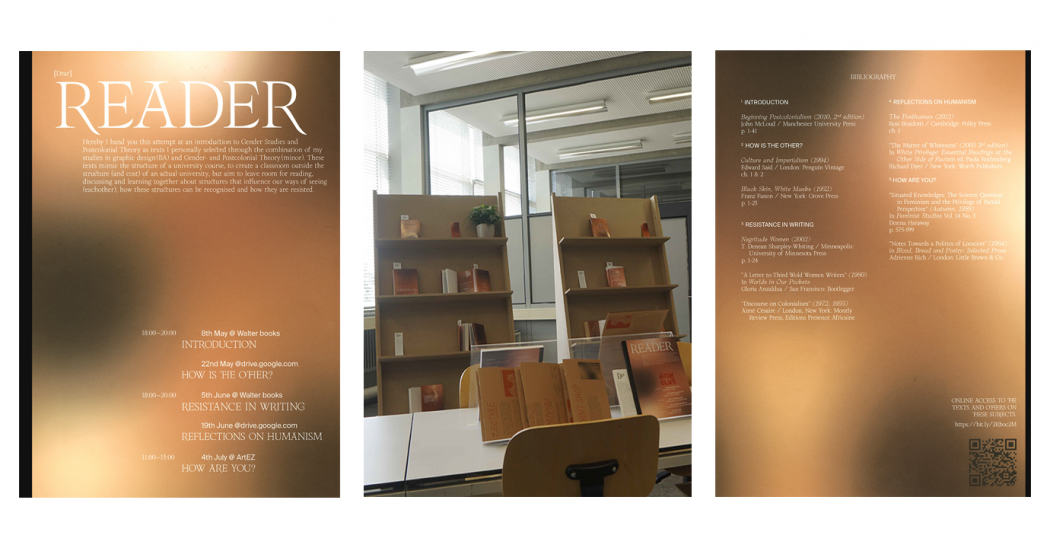 Learning more about the mechanisms of inequality, is one of my ways to cope with the awareness of the pain of others, and to keep myself available to feel, as well be somebody people can lean on. I don’t expect that only an oppressed minority can tell me what I should do, so I seek out the causes of my own prejudices and learn to recognize them, so that I can reflect on them consciously and so that my behavior and speech will be thoughtful.
Another way I try to create a space for developing conciousness is through collaborations. I like to collaborate in the organization of events, such as film- or documentary screenings, and am currently involved in a platform for female and gender non-conforming artists/designers. My two collaborators are still studying at ArtEZ and we share a sense of urgency about uniting and exhibiting more work by female and GNC students and peers. Collaborating is a inherit part of my work because as a designer, I’m always making things for, and therefore with, others. I’ve found that expressing my own interests during my time at ArtEZ has also helped me connect to good collaborators with whom I share common missions or ideals.
My advice for current students would then also be to collaborate a great deal during your studies and to be involved. Develop space for yourself and others to organize things together—that’s how you can discover your strengths and co-create (with) your environment.

In collaborations you can be faced with confronting realizations, as I did in the project I delivered with Niels Otterman for Museum Bronbeek. We discussed what it meant to them to decolonize the museum, and took a closer look at the representation on their grounds through their monuments. We found an overrepresentation of the Dutch military victims and the fallen soldiers at the time of the Japanese occupation (±5 years) of what is now Indonesia. In this way, Bronsbeek evades recognizing the many indigininous en their defendants victims during the Dutch occupation (±500 years) in a proportional way.
On the grounds, we found a bust of governor-general J.B. van Heutsz—the very one who’s statue was actually bombed in Amsterdam in 1967.[6] We tried to add some context to this sculpture, both through text and through a physical intervention, so that the bust will have a more educational and renewed symbolical purpose on the grounds.[7] 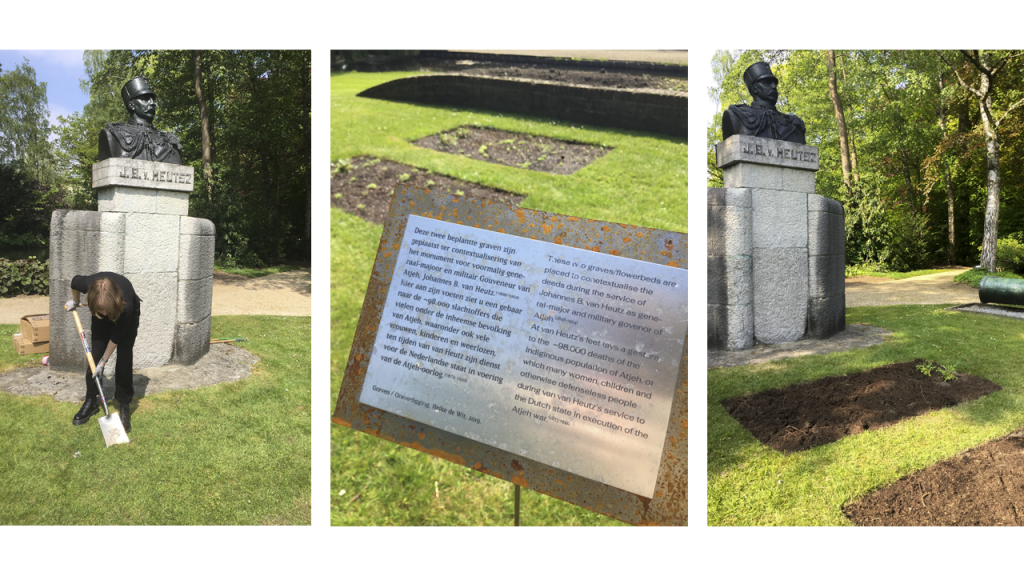 The sign reads:
Graven / Gravedigging, Heike de Wit, 2019.
These two graves/flowerbeds are placed to contextualise the deeds during the service of Johannes B. van Heutz (1898-1904) as general-major and military governer of Atjeh. At van Heutz’s feet lays a gesture to the ±98.000 deaths of the indigenous population of Atjeh, of which many women, children and otherwise defenseless people during van Heutz’s service to the Dutch state in execution of the Atjeh war. (1873-1942)

We planted flowers in the graves, in the colors of Atjeh’s flag, because mourning unites life and death, and in hopes of healing pain by giving it space to bloom, to regenerate. The project also inclued a map of the grounds with various walking routes that represented different narratives of history through the order of encounter with the remembrances provided, and left out, by the monuments and our interventions.

In my research, I often try to find ways for myself to combine wonder and curiosity with self-reflection and responsibility; to keep both feet on the ground as I open myself to different considerations. There is still plenty to learn, and I will never reach the point where that is no longer true. Over the last year, I’ve felt happy, confused, fatigued, content, insecure, empty and grateful – not necessarily in that order. Hopefully, I’m on the road to a place where my ideals are reflected in my work and life, and I look forward to the coming academic year, as I’ll be taking a MA in Gender Studies. There, I want to further explore and deconstruct social conditioning as a cause of discrimination and consider how an authentic reconstruction or personal reconditioning would be. I want to research how a revaluation of humanity and nature as a whole can take place on both personal and collective planes.
In the future, I hope to teach or play an advisory role in art education with relationship to gender and postcolonial studies. I’d also like to continue collaborating in collective platforms and spaces to create (among other things) written and visual forms of developing conciousness. I want to learn to value myself appropriately, but never put myself above others. I will always keep learning, allowing others to correct me. Finally, I want to practice the ability to observe myself and my environment with an equal amount of wonder, and to keep suspending final conclusions.

For more (contact) information, you can see my work at http://heikedewit.nl or approach me personally through heikereneedewit@gmail.com.