Creating Beyond: finding freedom in a COVID style framework of Trisha Brown’s Locus

Every year in October, all three year groups students of the Bachelor’s Dance engage in a week-long project called Beyond... The 2020 edition of Beyond..., which took place from 26 to 30 October 2020, had to migrate online due to COVID-19. This held unprecedented challenges for students as well as teachers: in the new ‘blended learning’ situation, everyone had to step beyond known ways of working, into the world of digital-live interaction – which revealed that this novel way of working contains potential for valuable insights and experience.

On invitation of Aurélie Lever, Head of the Department of Bachelor of Dance, the Beyond week 2020 was designed and directed by Eva Karczag. Eva danced with the Trisha Brown Dance Company from 1979 through 1985 and continues to teach through the company’s educational programme. She introduced the students to the work of the influential and acclaimed dancer and choreographer Trisha Brown, who left a multi-faceted and far-reaching legacy, creating work for art galleries, museums, and non-theatrical environments, as well as for proscenium stages.

Dancing with Trisha was inspiring, challenging, and propelled us all to become the best creative thinkers and makers, and the finest dancers and performers we could possibly be.

Locus: fusion of constraint and freedom

Each student prepared the space in which they would dance by marking out a square on the floor using masking tape. In that space, they performed Trisha Brown’s original Locus material Using Trisha Brown’s process as template, they also choreographed their own Locus by fulfilling the directions determined by the score they themselves made, using their own names and countries of origin. Each student followed their own tastes and interests in creating their own version of the choreography. They learned each other’s creations and danced these in their own personal ways. Performing in a 4-grid Zoom screen, the students could – and had to – play with many and any options regarding placement of themselves and their cameras, lighting, facing and timing.

At first, this method to create movement seemed to me quite mathematical and flat. However, after recognizing my own movement vocabulary in the phrase that I created and seeing the interpretations of my classmates, I changed my mind. I found my freedom within Trisha’s score inside the small space of the cube.

A choreographer’s work, especially the legacy of one as prolific, rigorous and idiosyncratic as Trisha Brown, can reveal a wealth of ideas that can be explored and used as a touchstone: dancers can model it, deviate from it, jump off it and make their own versions in infinite ways. Locus provided an extraordinary framework: while seeming restrictive, it encouraged performers to move from a new point of departure, discovering new ways of movement as they reached for the points of reference in any way they wanted. Using Locus as a framework in this way, led to discovering a fusion of constraint and freedom, which added to physical inventiveness in the creation of a piece and its performance.

When the COVID-19 pandemic hit, everyone went online.  Zoom, with its grid format, seemed a perfect container for Locus – and Locus the perfect dance for these times.

The decision to take the project online made it imperative to switch to a ‘blended learning’ situation. This meant that some students joined from their homes, while others joined from studios in the ArtEZ building. “We were fifty-eight students, five teachers (Eva herself, Shelley Senter, Bettina Neuhaus, Thomas Körtvélyessy and Eva Tremel) and two assistants, joining from six countries and multiple cities”, Eva describes the project. "It held new challenges for all of us. We were being asked to step beyond our known ways of working, into the world of digital-live interaction.” By the time the group began the week, they knew a great deal about how they would be working with the technology. At the same time, they were constantly playing with multiple unknowns, making many of their decisions as they proceeded. While students were working on their tasks during afternoon sessions, teachers and assistants moved between the 11 Breakout Rooms. They watched, gave feedback and suggestions on what they saw, and engaged the members of each group in collaborative problem-solving.

Less effort sometimes gives more clarity and freedom in my body. It was pure, pedestrian, human as Trisha Brown would have called it.

Trisha Brown's choreography is fluid, clear, very physical, yet needs to be danced with the greatest of ease. To be able to perform it authentically, it is imperative to un-do existing holding patterns. Eva explains: “As the week progressed, students began to consider the physical reality of increased space inside their bodies, opening up movement accessibility and choices. Rather than moving from one inactive body configuration to another, they explored swing and momentum, and had a glimpse into what it means to let movement happen.” 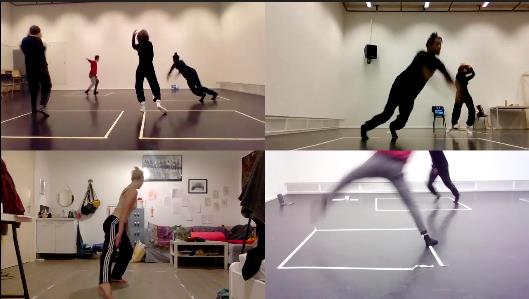 One of Eva’s goals with the project was to encourage students to reflect on and continue to explore the ideas they encountered during the Beyond ... Trisha Brown’s Locus week. In this way they can learn from the past and move forward into a future, dancing and creating work which is of their own making. “The project clearly moved us into new territory. Over the course of the week, we were able to see the student’s physicality open up, and their moving become more varied and freer. Our focus was not on limitations. We were looking for possibilities, and most students understood that following the constraints forced by the space and score restrictions as exactly as they could, pushed them into new mental and physical territories. They could feel and see their classmates up-ending habitual thought and movement patterns. At the same time, many students realized that it was essential, and up to them, to affirm their instincts as artists and dancers in order to discover their own freedoms within these (and any) restraints."

By erasing the mental boundaries between the ideas of ‘living’ and ‘performing’, I can become more engaged in what I am doing on stage. I can allow myself to be on stage, to be while performing – to fully experience my actions as they are and thus my actions to be fully complete.

During the project, in all Breakout Rooms students were mixed levels, so they encountered collaborative decision-making with colleagues from differing levels of experience. “We were encouraging students to also embrace the challenges and complexities of the online/in-studio format of the week. It was clear that many students discovered useful ways of approaching online learning. We were addressing not only physicality and imagination, but also ways of developing practice – essential for today’s dance artists, since it means learning about self-reliance, self-empowerment, how to mine one’s own imaginative resources, how to be mature enough to be able to work for oneself.”